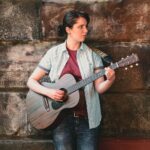 Since gently sidling onto the scene in 2018 with the beautifully woozy ballad ‘I Love Her So’, the Scottish troubadour and eldest daughter of The Proclaimers' Craig Reid has become a singular new voice in Americana. Her gigs bring a sense of calm to all the madness and mayhem with the stark honestly of her softly sung folk songs.

The Swedish sister-trio are the perfect band to get the party started with. Their riotous blend of folk rock with infectious pop hooks will have you jumping around and punching the air like you’re at a Yeah Yeah Yeahs concert in the early noughties.

With hints of First Aid Kit, Haim and MUNA, their punky take on Americana is winning fans all over. Get on the bandwagon while you still can. 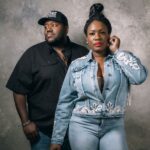 Another Duo/Group of the Year nominee for the 2022 AMA Honors & Awards, husband and wife duo Michael Trotter Jr. and Tayna Blount-Trotter use their mighty, magnetic voices to spread a message of hope and joy as The War & Treaty.

It's been a huge year for the partners, who have just signed their first major record deal with Universal Music Group Nashville. They've opened for the likes of Al Green, Brandi Carlile, Jason Isbell and John Legend. Clearly, you don't want to miss out. 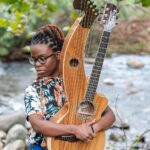 The complex compositions and daringly inventive style of Yasmin Williams is second to none.

Not satisfied with traditional fingerstyle methods whilst she was teaching herself guitar, the instrumentalist developed a distinctive way of playing that includes lap tapping — or using the neck as though it were a keyboard — drumming the guitar’s wooden frame and tap dancing for an additional rhythmic layer, and even bowing.

The Virginia native released her sophomore record in 2021 to critical acclaim.

Leon Bridges' first strides as a soul-inspired R&B artist prompted comparisons to legends like Sam Cooke and Otis Redding, but he quickly came into his own as a Grammy Award-winning, globally touring artist.

The Texas native has gone from stride to stride in the last couple of years, shooting to the very forefront of popular music, garnering praise from a multitude of musicians across the genre spectrum, including Holler fav Charley Crockett. 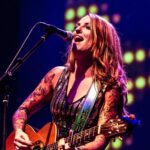 Midlands based Singer/Songwriter Kezia Gill, has been singing professionally for over 15 years. Born in Nottingham to a large musical family of Irish decent, her early years were spent surrounded by music. Her father, a professional musician for over 50 years and her single biggest influence, introduced Kezia to the world of performing, writing and most importantly, the vast back catalogue of music that has shaped her individual style. Pulling influences from a wide range of genres including Folk & Irish, Country, Rock and Blues, her sound is completely unique. She performs all over the UK, as well as the world, including previous shows in Europe, Australia and America. Her individual and uncomparable style is not only evident in her original material, but laced throughout her wide repertoire of classic covers. With her impressive vocal range, energy on stage and multi-instrumental talent, she makes every song her own.

Major success was had with her single ‘Whiskey Drinkin’ Woman’ being added to the Radio 2 playlist for 4 consecutive weeks. When Covid-19 put the brakes on Kezia’s live performances, she turned to performing virtually, and her weekly Lockdown Live Streams on Facebook have been hugely successful, receiving repeatedly high viewing figures, and amassing her very own online fan group, 'The Friday Night Crew'. Continuing to release singles throughout the pandemic, and enjoying regular radio play from BBC Radio 2, Kezia also released her fourth Official Music Video to her latest single 'Wings'

.2021 is already set to be an exciting year for Kezia, as she continues to build on her success and make up for the lost time of the pandemic. Not only is new music on the horizon, but with Kezia's early influences of rock and blues deep rooted within her, she intends to spread her wings and explore a more "Americana" Sound. With the songwriting ability of a country artist, the stage energy of a rock star, and the voice of the blues, one thing is for sure.....

coming next from this exciting artist is definetely worth sticking around for. 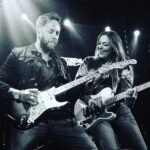 Touring the UK and transatlantic performances from LA to Nashville attracted international recognition landing several major global brand endorsements. Touring extensively with a host of international artists and UK country music alumni has found the duo sharing the stage with Nashville legend Phil Vassar, main stage appearances ahead of Lindsay Ell, Don McLean, Jessie J & Kaiser Chiefs, and transatlantic performances in Los Angeles & Nashville. Whether performing acoustically or with the full band, their live show is not to be missed. 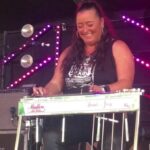 “The Princess of the steel guitar, a multi talented Performer” GAZETTE

This year Sarah Jory celebrates 35 years in the industry and is without doubt one of the finest Pedal Steel Guitarists in the world. She has collaborated with some of the biggest names in music including Van Morrison, Phil Collins, Elkie Brooks, Ricky Skaggs, Kenny Rogers, Glen Campell.. the list goes on.. demonstrating her versatility on a range of instruments. Sarah resides in Exmouth when not on tour which she does extensively over the world and has notched up a list of amazing venues like Madison Square Gardens NYC, New Orleans Jazz Festival, Montreux Jazz Festival and the Hollywood Bowl in which she performed with Van Morrison on his live CD. A rare chance to see Sarah perform her stunning talents within her home County! 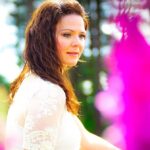 Native Devonian girl Sarah Yeo has been making a impression on the Live music scene for at least two decades performing her way around many venues both large and small in the UK. In more recent years she has won fans performing across the pond in New York City and California. Likened to voices such as Karen Carpenter, the Corrs, Mary Chain Carpenter to name a few. Her versatility has made for a very interesting gigging past playing in various bands and as a soloist she has also gained endorsements from household names,

Shane Richie "what a voice! " and Nina Myscow "She should be a star". Sarah who has shared line ups with the Brand New Heavies, Incognito, Craig Charles and has played stages such as Mello, Midwinter, Glas - denbury, Dart, Exeter Respect festivals feels her varying experience on the road has greatly enriched her musical senses, and is what's enabling her song writing to cross over in to many different genres. Several of Sarah tracks have enjoyed radio play on BBC and Independant Radio Stations and has the frequent support of ARC FM, CountryRadio.uk, East Devon Radio, Riviera FM and an army of online stations and shows including' Live in the Living Room', Visual Radio Arts, Russell Hills Country, UK Country DC Brown. Highlights include playing at Exeter City Football ground, Switching on Exeter City and Torquay Festive lights, Supporting Nashville's Cheley Tackett, Texas's Bob Cheavers, Gaz Brookfield, The Drifters... Over the course of her career so far perhaps one of the biggest accolades was to be named by one time audience member Jim Marshall (founder of Marshall amps) as his favorite Singer.

Tennessee Twin are a skilful acoustic duo playing original modern country music from their base in Cambridge, UK. Their original songs have quickly caught the admiration of British country audiences, blending memorable melodies, gritty yet thoughtful lyrics and exquisite harmonies. Keren Morall - country commentator and podcast host, said of Tennessee Twin ‘These guys are exceptional. The emotion they bring with their songs is undeniable. Their story telling is second to none.’

Their song writing has earned international recognition. Their latest singles, 'Every Story', ‘Two Heart Rendezvous’, 'When We Move' and 'Rewind' all received universal praise and gained airplay around the world. Their debut EP ‘Tips In A Jar’ (August 2019) went straight into the iTunes UK Country Chart at no.1 and has established itself as a favourite of country fans while gaining widespread airplay. In the words of Gaz Williams of ‘Building Our Own Nashville ‘It showcases the kind of storytelling prowess that has already earned Tennessee Twin international acclaim.’

Before ‘Tips In A Jar’ their previous single 'Wings of Red, White and Blue' won the Nashville Music City song writing competition in March 2018 taking them to record in Nashville, Tennessee later that year.The duo won all three of their nominated categories in the UK Country Showcase Listener Awards 2019 (Best Newcomer, Best Duo and Best EP) and were finalists in the UK Country Music Awards 2020 (Best Duo) and 2019 British Country Airplay ‘Artiste Of The Year’. They also received nominations more recently in the 2021 UK Country Music Awards for Duo Of The Year and in the ARC Radio 2021 Awards for Duo Of The Year and Single Of The Year (for 'When We Move').